Views and News from the Heart of Bangkok

I’m back now from the 2012 ICIRD held at Chiang Mai. This is the second year of the conference, which is an intiative of four universities (Chiang Mai, Chulalongkorn, Thammasat and Mahidol) and centred on notions of development. My role this year was to organise and chair a panel on female entrepreneurs in the Mekong Region. It was not, as I had predicted, the most popular panel, partly because of the scheduling and partly because some colleagues and students seem to have quite a narrow range of interests. Anyway, we presented our papers well enough.

First, I gave an introductory session on the situation in which female entrepreneurs work in the Mekong Region and the changes that might be expected over the next few years (“Impact of Social and Business Environmental Changes in the Greater Mekong Region for Female Entrepreneurs”).

Next up was Khun Wilaiporn Lao-Hakosol (see not very good photo below) who presented a paper on behalf of herself, myself and Dr Nittana Southiseng on governmental support for SMEs, particularly female SME owners, in the CLMV countries (“Government-Business Relationships in the CLMV Countries: The Impact on Female Entrepreneurs”).

Next up was Aj Reema Thakur making her debut at this level and presenting a paper jointly by herself and myself on her fieldwork among a sample of 80 female social entrepreneurs in the Lampang Municipality area (“Characteristics of Thai Women Entrepreneurs: A Case Study of SMEs Operating in Lampang Municipality Area”) (see second not very good photo below). 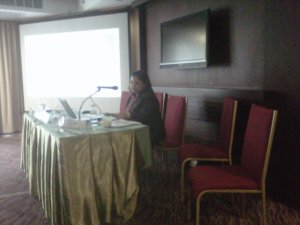 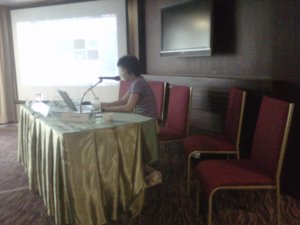 Having delivered the papers, one of the next tasks is to work out how to publish them for a wider audience. I am inclined to think it would be a good idea to publish a small book, with the four papers, an introduction and maybe one or two other things, which can come out via Shinawatra University – different versions can go to journal publication for those who might prefer that. However, let’s see what other participants have in mind.